Uzbekistan officially the Republic of Uzbekistan (Uzbek: Ozbekiston Respublikasi or Ўзбекистон Республикаси, O'zbekiston Respublikasi) is a doubly landlocked country in Central Asia and one of the six independent Turkic states. It shares borders with Kazakhstan to the west and to the north, Kyrgyzstan and Tajikistan to the east, and Afghanistan and Turkmenistan to the south. Prior to 1991, it was part of the Soviet Union. Uzbekistan is an observing member of the Turkic Council.

Once part of the Persian Samanid and later Timurid empires, the region was conquered in the early 16th century by Uzbek nomads, who spoke an Eastern Turkic language. Most of Uzbekistans population today belong to the Uzbek ethnic group and speak the Uzbek language, one of the family of Turkic languages.

Uzbekistan was incorporated into the Russian Empire in the 19th century and in 1924 became a constituent republic of the Soviet Union, known as the Uzbek Soviet Socialist Republic (Uzbek SSR). It has been an independent republic since December 1991. 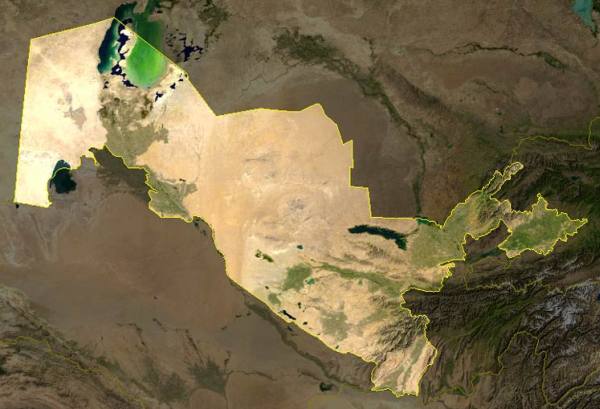 The highest point in Uzbekistan is the Khazret Sultan, located at 4,643 metres (15,233 ft) above sea level, located in the southern part of the Gissar Range in Surkhandarya Province, on the border with Tajikistan, just north-west of Dushanbe (formerly called Peak of the 22nd Congress of the Communist Party).

No country in Central Asia seems to have it so good, yet at the same time have it so bad, as Uzbekistan. The region's cradle of culture for more than two millennia, it is the proud home to a spellbinding arsenal of architecture and artefacts, all deeply infused with the raw, fascinating history of the country. But as students of that history know, it's also sprung a few bad apples over the years. Tyrants enamoured by the country's physical bounty have run the territory we now call Uzbekistan since time immemorial.

Concentrating on the good, if there was a Hall of Fame for Central Asian cities, Uzbekistan would own the top-three entries: Samarkand, Bukhara, Khiva. The names practically epitomise the region, conjuring up images of knife-twirling dervishes, serpentine desert caravans and architecture that blends with the sand.

Seen in person, the Big Three do not disappoint (the occasional overzealous restorative effort notwithstanding). Alas, they sometimes overshadow the country's other attractions, which include dazzling bazaars, ancient desert fortresses and an impressive array of largely unsung natural attractions.

All of that is enough to eclipse the bad memories evoked by names such as Jenghiz Khan, Timur, Nasrullah Khan and Stalin. The country's long-serving current leader, Islam Karimov, is no saint either. Despite it all, the Uzbek people remain good-spirited and genuinely hospitable - yet another prime attraction in this oddly endearing country.

Khiva : -  The last independent khanate frozen in time amid the desert. Crafty Uzbekistan Silk in Margilon (p220), ceramics in Rishton (p221), suzani (silk and cotton coverlets) in Shakhrisabz  and everything under the sun in Bukhara.